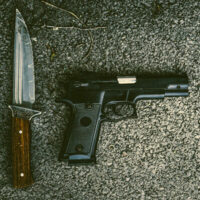 A U.S. federal judge in Maryland recently sentenced a Florida woman to 16 years in federal prison for interstate domestic violence, according to a Department of Justice press release.

According to the plea agreement in this case, the Florida woman made contact with a 17-year-old minor female via social media in May 2017. After communicating with the minor on various platforms, the minor left her father’s home to date the Florida woman.

On July 21, 2017, the minor traveled independently to her mother’s home in Halethorpe, Maryland. The minor intended to finish high school in Maryland and then return to Florida. The minor planned to resume dating the Florida woman and continued communicating with her via social media and other platforms.

The minor’s mother reported these activities to local authorities in Florida, who commanded that the Florida woman cease and desist further communication.

As a result of this incident, the minor sustained a fracture to her orbital bone and stab wounds to her eyelid, head, and hands. And the Florida woman pleaded guilty to U.S. federal charges of interstate domestic violence.