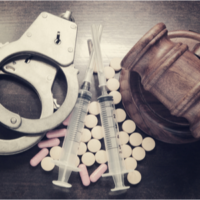 A 40-year-old man from Bowie, Maryland pleaded guilty to federal charges for several drug crimes and bribery of a government official, according to a press release by the United States Attorney’s Office, District of Maryland.

The investigation of this incident traces back to August 2018. That is when federal officials from the United States Postal Inspection Service (USPIS) and the Drug Enforcement Administration (DEA) began probing allegations of cocaine distribution in Maryland involving use of the postal system.

As a result of a plea deal, the Maryland man pleaded guilty to the following U.S. federal criminal charges:

Any person who violates Section 841 is guilty of a federal crime. Though the applicable punishment can change based on various factors, including the type and amount of controlled substance in question. Using cocaine as an example, distribution or possession with intent to distribute:

On a related note, 21 U.S. Code § 846 clarifies that any conspiracy or attempt to commit these crimes is treated in the same way as a completed crime.

18 U.S. Code § 201 furnishes the federal laws against bribery of public officials. Under this section, it is unlawful for any person to give, offer, or promise anything of value, directly or indirectly, to a public official or someone selected to be a public official.

More specifically, the bribe in question must be given, offered, or promised with the intent to:

Any person who violates Section 201 is guilty of a federal crime. If convicted, the punishment can include imprisonment for a maximum of 15 years and criminal fines up to three times the amount of the bribe in question.

If you need legal assistance with drug crimes or other charges under U.S. federal or state law,  the Bel Air criminal attorneys at Schlaich & Thompson, Chartered can help. Reach out to us today for a consultation.